The Dutch Rett Syndrome Society has awarded its annual prize for the best Master’s thesis to MPI PhD student Midas Anijs, for his innovative research into Rett syndrome using miniature ‘brains’ grown in the laboratory.

Rett syndrome is a rare genetic brain disorder that leaves many affected children unable to speak or walk. The Dutch Rett Syndrome Society supports people with Rett syndrome and their families and carers, and works to increase awareness of the condition. The Society established their annual Master’s Thesis Prize to recognize innovative research into Rett syndrome that seeks to make links between basic research and real-world applications. The prize may be awarded to projects in fields as diverse as speech therapy, education, nutrition, occupational therapy, neurology and genetics. 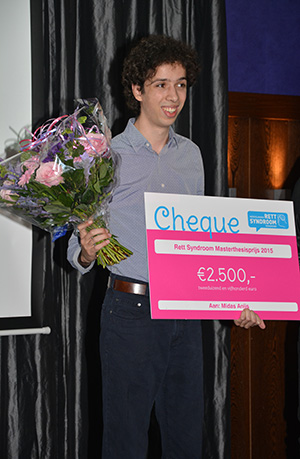 The 2015 prize was awarded to Midas Anijs, a PhD student in the MPI Neurogenetics of Vocal Communicationgroup, for work he undertook as part of Radboud University’s Molecular Mechanisms of Disease Master’s programme. He received the €2,500 prize at the Rett Syndrome Society Symposium in Houten on 6 November 2015.

Midas’s project, conducted in the lab of Flora Maria Vaccarino at Yale University, focused on an unusual form of Rett syndrome that is caused by a mutation in the gene FOXG1. Most cases of Rett syndrome are caused by mutations in a different gene – MECP2. Because the MECP2 gene is located on the X chromosome, Rett syndrome usually affects only girls. But FOXG1 mutations cause Rett syndrome in both boys and girls.

To study how genes like FOXG1 contribute to brain development, researchers often use cells grown in the laboratory, or animals, such as mice. These experimental systems are incredibly useful, but they cannot capture all the complexities of human brain development. Instead, Midas used a remarkable new technique that allows miniature ‘brains’, less than 1 mm in size, to be grown in the lab using cells taken from a person’s skin. By comparing the ‘brains’ grown from cells from children with FOXG1 mutations to those grown from cells from normally-developing children, he identified differences in the ways the ‘brains’ form that might reflect what goes wrong during brain development in children with Rett syndrome.

One limitation of this approach is that the FOXG1 mutation is not the only genetic difference between a child with Rett syndrome and an unrelated normally-developing child – there are millions of other genetic differences that could also affect how the brain develops. To eliminate this extra variability, Midas used a DNA-editing technology called CRISPR to specifically alter the FOXG1 gene in cells taken from a normally-developing child, and thus create two sets of cells that are identical except for the altered FOXG1 gene. These cells will allow the role of FOXG1 to be studied with even greater precision in the future.